My Heroes Have Always Been Junkies is graphic novel storytelling at its best. It’s clean and concise with no plot holes or superfluous anecdotes to add confusion or divert the reader’s attention in substitute directions. (My God, I sound like one of those how-to screenwriting books). Very few storytellers can master the art of making a story seem simple or effortless while also sprinkling little plot clues throughout. It’s amazing. It’s magnetic. It’s Ed Brubaker and I’m his number one fan!

You’ve probably seen Brubaker’s work upon the shelves of comic book shops, or in the graphic novel section of book stores, or possibly on the night stand amid stacks of other crime novels to be read by a clandestine lover. He’s the kingpin of comic book pulp-crime. The Thompson machine gun (rat-a-tat-tat) of female backstabbers and stool pigeon blowback. The comic book equivalent to James Ellroy, Jim Thompson, or Dan J. Marlowe (I hold him responsible for introducing me to Thompson and Marlowe). With Sean Phillips penciling and inking his stories of pushers, prostitutes, perverts, and petty thieves this dynamite combo of writer and artist are time-bombing their way to the top of comic book to-read lists as well as the overall widespread genre of crime fiction.

I first encountered this raconteur of pulp crime comic book storytelling after Brian Michael Bendis’ incredible run on Daredevil came to an end in 2006. At that moment I thought, “I’m done with Daredevil. There’s no other comic book writer that can weave a complex crime drama like Bendis”. But boy-oh-boy was I ever wrong. Brubaker took hold of the writing reigns on Daredevil post Bendis and brought with him a pop-pulp influence to Hell’s Kitchen’s devil protector that meshed seamlessly with Bendis’ previous work on the series. Since that time it’s been a piecemeal journey following Brubaker’s written work. From his spy-espionage thrillers in Captain America and The Winter Soldier, to his world of lowlifes and petty criminals in Criminal, to his “there’s definitely something weird going on with this woman” in Fatale, to his Hollywood backlot shenanigans in The Fade Out, to his exploration of vigilante violence in Kill or Be Killed, until arriving at his romantic tale of teenagers on the run in My Heroes Have Always Been Junkies, I’ve been along for the ride. After all, I’m his number one fan!

In My Heroes Have Always Been Junkies, released by Image Comics earlier this month, Brubaker puts a new twist on the classic femme fatale with teenage protagonist, Ellie. Ellie is bad news. I’m talking baaaaaaaad news. Her “uncle” checked her into a drug rehabilitation clinic, but Ellie doesn’t really have a drug habit. Her addiction is a fascination, or more like an obsession, with junkies. She’s romanticized the life of junky musicians whose terminal drug addictions allow them to achieve greatness and create timeless works of art.

What if drugs help you find the thing that makes you special? Like what about David Bowie or Brian Wilson…or Lou Reed? All the music they did when they were getting high is mind-blowing…Pet Sounds? The Banana Album?…and Hunky Dory? But nothing they did when they got off drugs even compares. It’s like heroin and speed and pills let them touch some part of themselves that they could never get back to.

You’re absolutely right Ellie, those albums are mind-blowing and some of the best musical creations of the 20th century (we could also add Trent Reznor’s The Downward Spiral or Kurt Cobain’s In Utero as well as many others to the list), but what you’re not telling us is how those artists spent long nights shivering in cold sweats, haunted by nightmares of death, then tormented by broken relationships and career mishaps due to an affliction brought on by drugs. Anyone who’s spent time in the dark recesses of their mind tortured by an inescapable and unrelenting pain can tell you that it’s not cool and not very much fun. You’re notion of these artists is idealized and romanticized and naive and that’s what makes you so very dangerous Ellie. 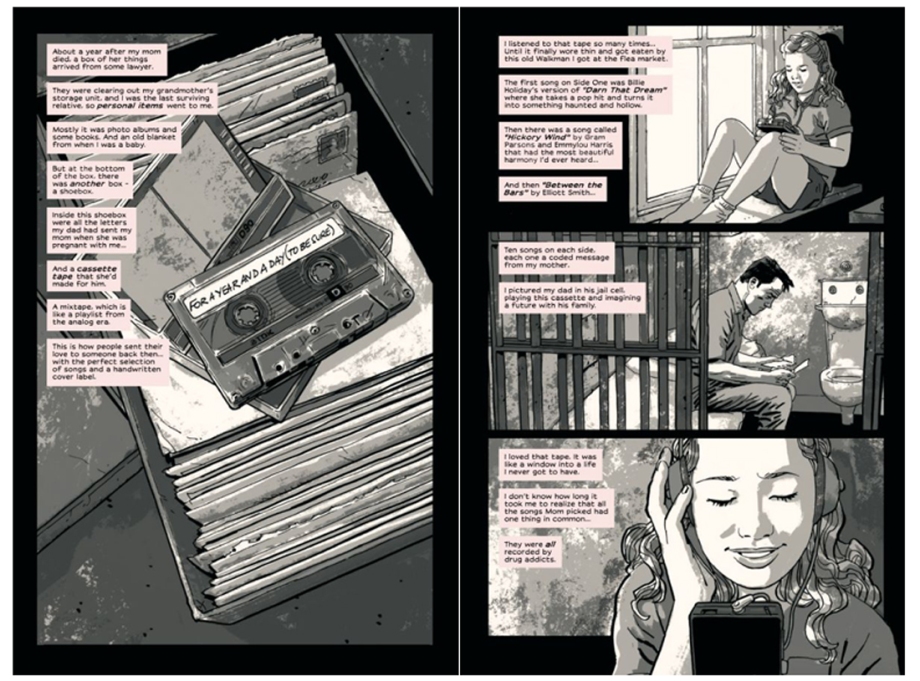 Something I love about comics is the use of narration, either as a character’s inner monologue or as the often frowned upon Voice-of-God, to give readers insight to a character or introduce a setting. Writers are not allowed the option of using narration when writing screenplays because it is considered taboo, but writers are allowed the freedom of narration when writing comics and Brubaker pulls it off like it were poetry.

This is where the next few days drift by…in a haze of cigarette smoke and dope. We’ve been torn free of reality…into something else…this holy kind of bliss. What young lovers don’t secretly want this? To just be bandits on some lost highway…running until it all burns down?

What draws me to Ed Brubaker’s stories (like a junky to their next fix) is his ability to masterfully combine alternative culture, crime, and heartfelt drama into a delicious bowl of savory mashed potatoes (Yummy…mashed potatoes). I’ve eaten up your stories Ed and you’re an inspiration to my storytelling, so whatever you do, don’t you dare think about ever stopping (or needlessly killing one of your characters in a cliffhanger and then bringing him/her back in the next cockadoodie issue) or I’ll be forced to pull you from a car crash, gradually wean you back to health, then pistol-whip you in front of a typewriter as you write your next story about deviants and sociopaths (a la Annie Wilkes). Because I’m your number one fan and you better start showing me just a little more appreciation, Mister Man!